As mentioned in previous articles, I go to a local park three or four times a week here in Mexico to exercise. Sometimes I walk there, sometimes I bike, but it depends if I have to go to the fruit and vegetable stand to buy something fresh for the day.

The park itself is not fancy, in fact, the exercise equipment is falling apart. The play area looks intact and sometimes I see moms, dads, and grandparents with small kids or babies in tow, taking advantage of the slides and swings.

Some doting ‘dog’ parents even try to encourage their pets to go down the slides! I find this rather amusing and wonder how the dogs feel about this.

There are five pieces of equipment, one totally unusable and a couple of others getting close. My favourite routine is twenty minutes on the ‘treadmill,’ five minutes on the ‘twister’ (for my obliques), and then repetitive sets on the ‘bar’ to strengthen my arms. I only use the stationary bike when the other equipment is not available. The bike rumbles and groans, the pedals clang, and I expect any day it will go the way of that other piece of unusable equipment, to sit there, rust, and collect dust.

Other Exercisers in the Park

People come and go-sometimes I never see them again. But there are two regulars besides my husband and me. A man, who might be in his forties, hard to tell as he is in good shape, often shows up on his bike; he has his own special routine. He is friendly and smiles often.

At first, my husband would show him how to use the bar properly as he was always in a rush. In fact, most people I see use that machine as if they are in a race, instead of slow and easy with deep breaths in-between.

The other regular, Bob Marley, is as constant as we are. I see him often. He changes up his routine depending on what equipment is available to him.

He is not tall, maybe 5’ 4” or 5’ 5”, has long dark hair in dreads, a short beard with some white hair; he is quiet, and has a big smile. I don’t know him well and I don’t feel any negative vibes from him. He is always neatly dressed but I never know what he will show up in. Sometimes, he has this cool woollen-type hat with a peak that he wears; he has cool shades, interesting t-shirts, and colourful shorts. I would judge him to be maybe 60 or more but hard to say as he is in great shape, not an ounce of fat on him. I think he would be a really interesting guy to get to know.

Out of all the people who come and go to the park he stands out – one of those memorable people.

I call him Bob Marley because I don’t know his name, yet… 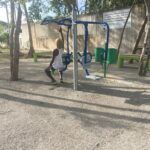 The park is often used as a throughway with people walking their dogs, on their way to catch the Collectivo (bus), drop off garbage, or who are just on their way to somewhere else.

There is a school next door that used to be bustling with noisy laughing children. Sometimes their balls would come flying over the walls and you could hear the giggles when my husband would throw them back to them. Now, it is quiet and has been that way for many months because of the pandemic.

Although there are other parks, I will continue to use this one and maybe someday I will strike up a conversation with ‘Bob Marley.” In the meantime, I am content to smile and say hello and enjoy the peace and quiet of the park, while I exercise and think about my day ahead.

Side Note: The real Bob Marley’s son, Rohan Marley, runs an exclusive beach club at a resort not too far from this park. It is called the RoMarley Beach House.

Have you met interesting people while travelling? Who stands out? Please share in the comments below.