When I told my friends we were visiting Costa Rica the first time, we got lots of warnings about the deadly snakes and “why would we go there?”

Well, two winters in, we did not see so much as a scary bug let alone any snakes.

When we decided to go to Mexico, it was “aren’t you worried about the crime? What about the snakes, spiders, and tarantulas?”

Well, I am happy to say we have not had any dealings with crime…nor snakes…however, we had a creepy-crawly visitor.

Visit from a Tarantula

We had new neighbours move in next door to us and I decided to go and say hello. My husband had gone out to ride his bike and do some errands. Our neighbours had invited him to join us when he came home and I sent him a message telling him where I was.

When he arrived, he hollered through the door, I just need to take care of this tarantula and then have a shower. WHAT?!

The size of a tarantula can vary, ranging anywhere from 4.5 inches to 11 inches, from the front right leg to the rear left leg, and can weigh 1 to 3 ounces. In light of that, this might have been a very young one but I’m not so sure my husband thought so when he took the photo. 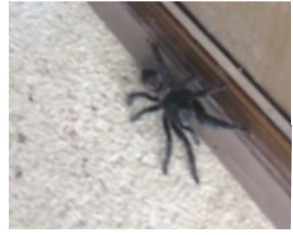 Of course, we all had to have a look. It was between our two doors, just sitting there. Ugh! All I could think about was, boy, am I glad I wasn’t the one who found it.

We scurried back to the ‘safety’ of our neighbour’s home and let my husband take care of it. He got our long-handled dustpan and scooped “ Terrance the Tarantula” (yes, he named the darn thing!) into it. He let it go by the side of the street and we watched it cross to the other side. I have to admit it was quite impressive looking as he meandered across the road. (I think we were in too much awe to get another photo!)

So, is the Tarantulas native to Mexico and is it dangerous?

I could never understand the fascination with these 8 legged critters. I know people get them from pet shops. So here is what I learned.

It turns out that Mexico holds the second-place spot in the world for the number of tarantula species and it could very well be number one as only a few people have taken a big interest in them (well, that doesn’t surprise me!).

At last count, there were 66 species in Mexico, with the most common being the Brachypelma genus and the Aphonopelma.

The name tarantula is associated with a myth in the small town of Taranto on the southern coast of Italy. Though unrelated to what we call the tarantula now, it was named after the town and called Tarantola. Legend has it that this spider caused a disease called ‘tarantismo” and melancholy and death were a result of its bite. To avoid this death, it was believed one had to dance a crazy, uncontrolled dance set to music, called the ‘tarantella.”

The question remains though if these spiders were unrelated to the tarantula of today, how did the name come to be in other areas like Mexico? A lot of the settlers in this area came from southern Spain and Italy and most likely came across big hairy spiders and associated them with their large spiders, the Tarantola, back home.

Despite their big size and hairy bodies, they are not poisonous but can inflict a nasty bite. All tarantulas are venomous, not to be confused with poisonous. Bites can cause serious discomfort that might persist for some time. Some bites are severe enough to cause spasms which can recur over several days.

The bite of the African tarantula can cause strong hallucinations. Should you be the unfortunate recipient of a bite from any tarantula, it is wise to seek medical attention. Allergic reactions can occur in some cases because proteins are present in the toxins. Just for the record, they really don’t like to be handled!

Are tarantulas immune to other predators? Apparently not! A pregnant parasitic Pepsis wasp will paralyze an unsuspecting tarantula with its sting and lay eggs on its body. When the eggs hatch, the tarantula is eaten alive by the wasp larvae.

In the wild, tarantulas can live up to 30 years. The male has a much shorter life span than the female.

Tarantulas are burrowers and typically live in the ground. They are carnivores and nocturnal. Their diet consists mainly of insects (such as crickets, grasshoppers, beetles, cicadas, caterpillars, and other spiders). The bigger game includes mice, frogs, toads, snakes, and lizards; some species can eat small birds.

They grab with their legs and then inject venom, paralyzing their unfortunate prey before eating. They secrete digestive enzymes that liquefy the bodies of their victims making it easier to suck them up through their small mouth openings. A good meal can last a tarantula for a month!

Contrary to what you might think, the main use of the tarantula’s web isn’t to catch unsuspecting prey but to signal to the female he is ready to mate. He leaves his sperm on the web which his mate will spin into a cocoon with her eggs. A male who has hung around too long may find himself her next meal!

According to National Geographic, it is not uncommon for a single egg sac to contain 500 to 1,000 babies. That’s a very large family.

The scientific name of the tarantula is Theraphosidae.

. Tarantulas are a Delicacy

Certain cultures in Venezuela and Cambodia consider tarantulas a delicacy. They remove the hairs (which can cause an itch or skin irritation in humans) by roasting over an open fire, and then they eat them.

Tarantulas shed their external skeletons. During this process, they also replace internal organs such as stomach lining, or female genitalia. They can even regrow lost appendages. Generally, a one to 3 years old will moult two-three times, young adults once a year, and a mature adult about every two years.

And for those of you who are still with me, here is an incredible video showing a tarantula’s egg sac as it is being opened. My thoughts on watching this was “that’s a very large bunch of baby tarantulas!”

So, you are probably wondering “Do I like them any BETTER now?” Sorry, but that is still a resounding no! They are right up there with snakes.

Do I respect them? Definitely! I know they have a purpose and are important to the ecosystem as they eliminate insect plagues and they are more likely scared of me than I am of them!

How about you? Do you like or own a tarantula?

10 thoughts on “Mexican Tarantula – Are They Poisonous”