First, we visited a young fellow, Caleb Barris, who we once billeted during hockey season; he was from Martins Ferry, Ohio at the time and has since relocated to Uxbridge Ontario.  We then visited friends, Rick and Laurie, who had just built a new home in the same area. After a wonderful steak dinner and wine, we spent the night there and then headed out early in the morning for St. Catherine’s.

Before staying here, I did not know a whole lot about St. Catharines. It is the largest city in Canada’s Niagara Region and the sixth-largest urban area in Ontario, with 96.13 square km of land. It is situated 51 km south of Toronto across Lake Ontario and only 19 km inland from the international boundary with the United States along the Niagara River. Another thing I did not know – residents are known as St. Cathariners and the city has an official nickname “the Garden City’ because it has 4 km of parks, gardens, and trails. The population in 2016 was 133,113.

The actual area we stayed in is called Port Dalhousie (pronounced duh-LOO-zee). In addition to a lighthouse and pier, it is mostly known for its waterfront appeal and has one of the city’s most popular beaches located at Lakeside Park.

Tom and Liza were absolutely amazing! Like our previous 3 house sits, the bar was set high. They generously provided us with provisions to make our stay a comfortable one. Their easy-going nature, humour and genuine welcome made us feel as if we had known them for a long time.

Our first night was spent with them and Tom cooked us an amazing dinner, served with red wine. They left early the next morning to start their vacation on the eastern coast.

We had our choice of bedrooms (of course we chose the one with the King size bed). We also had the use of a newly installed hot tub, complete with numerous jets and music. Their backyard is not large but is well landscaped. There was this amazing flowering plant (shrub) that covered the whole back fence and I was able to get a nice photo before it died off. 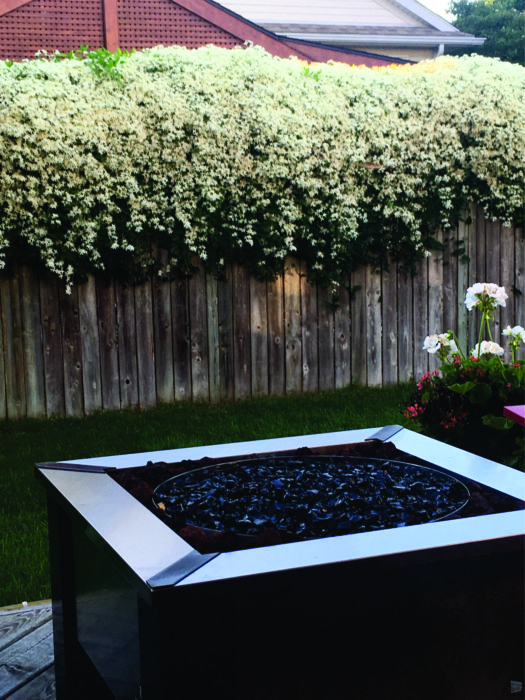 This home is called Henley’s Dream and can be rented through Airbnb. I guarantee you won’t be disappointed if you decide to stay there. As your hosts, Tom and Liza will take great care of you!

Well-written instructions were available for everything imaginable. I don’t think they left out a single thing!

Stanley and Sophie, their golden retrievers, stole our hearts. Sophie was the younger of the two and for her, it was all about the treats! Stanley was older and quite blind. They both loved walks, being petted, and rewarded for their good ‘deeds.’ Stanley just needed some gentle guiding, especially when he got into a corner and couldn’t see his way out – literally! Sophie liked to stick close to the humans so we had to be careful she wasn’t underfoot. She especially liked hanging around the kitchen – I suspect hoping food would make its way to her mouth. 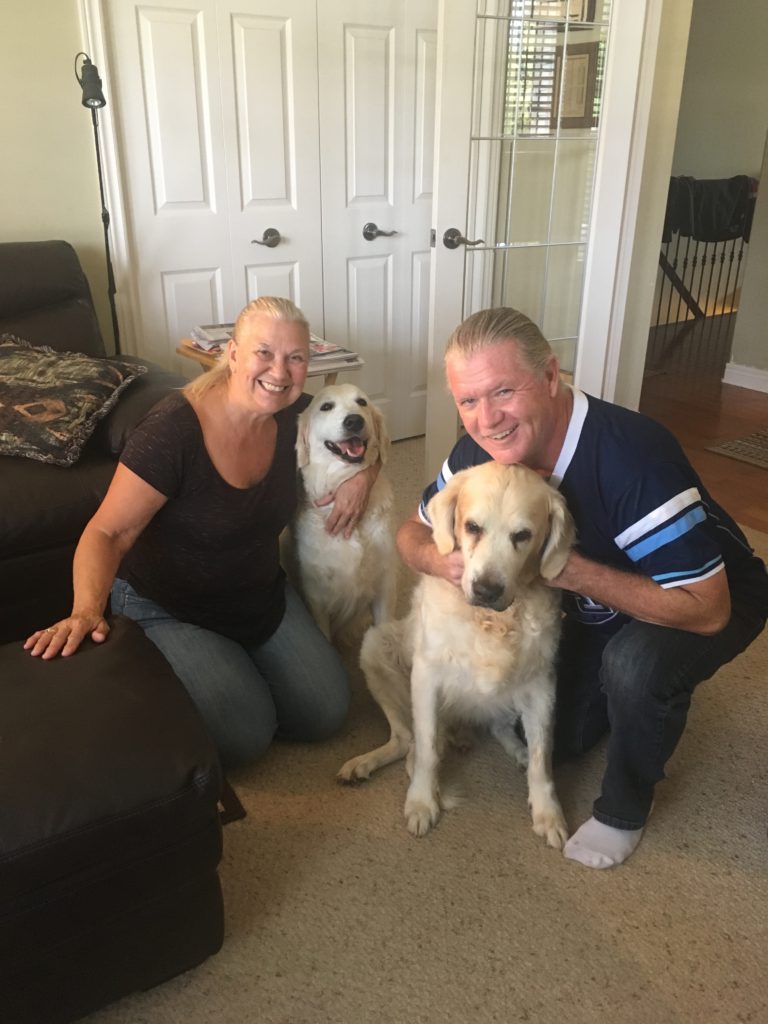 They were extremely well behaved and rarely barked.

Tom and Liza had detailed instructions on everything from feeding to medication to what they liked. They were very strict about what Sophie and Stanley could and couldn’t eat when they were to eat and go for their walks and bio breaks. As I have mentioned previously, it is extremely important to follow the guidelines when it comes to feeding and medication.

Since we were right smack in the middle of the Niagara Wine Festival, it was an opportunity to check it out.

One night we went to the Montebello Park Wine & Culinary Experience and Centre Stage (featuring an all Canadian lineup) where we heard the band “The Strictly Hip” (tribute band to The Tragically Hip) formerly of St. Catharines and now out of Buffalo. They were awesome and many people were up close to the stage dancing. The music was continuous! 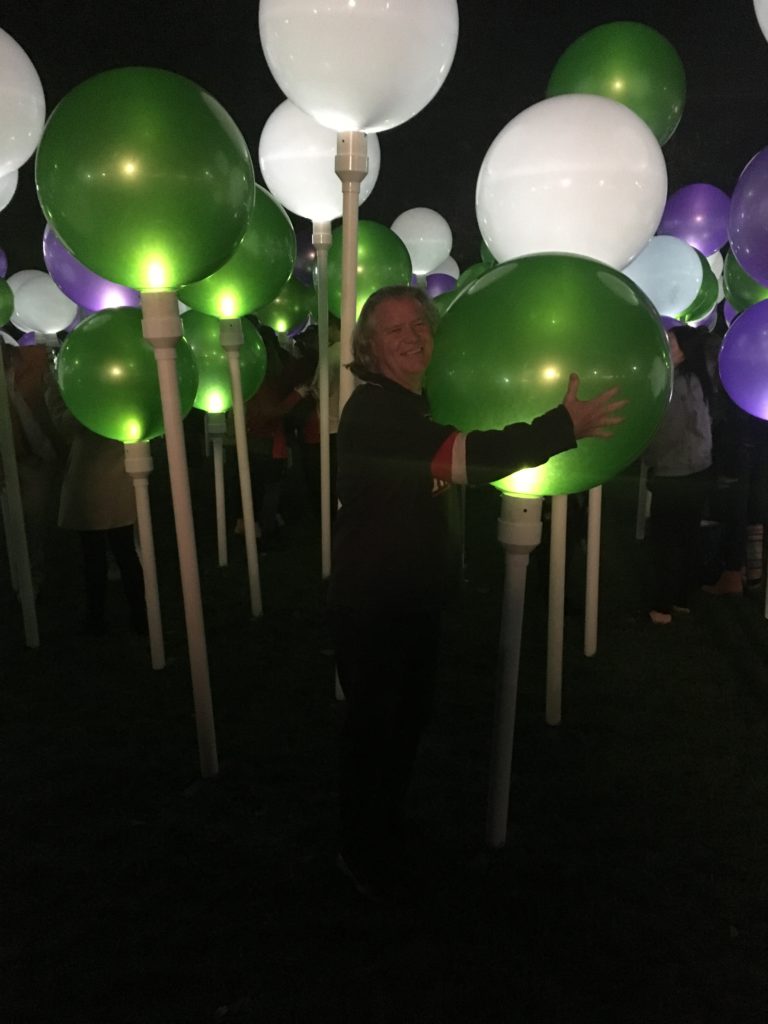 We had friends come in to visit and we decided at the last minute to purchase a wine tasting passport through WagJag – $15 for two! This was so much fun! We visited 8 wineries in total with a minimum of three tastings per person (two had 4 tastings each). Since hubby was the designated driver, I had a little extra (!). I think my favourite was the DiPietro Winery in Jordan Station. The owner was very knowledgeable and entertained us with the history of the winery while serving us. I ended up buying a bottle to keep for our upcoming 10th wedding anniversary at the end of October. If you ever go there, make sure you give this one a try – the Kitchen Zinc! 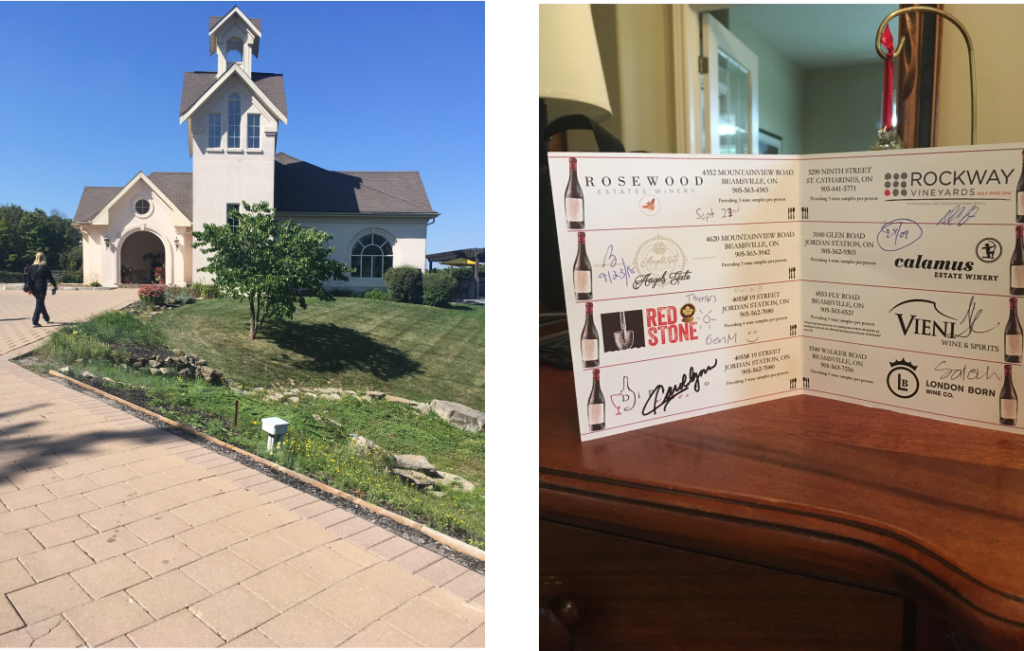 On another day, feeling a bit playful, we decided to check out the Lakeside Park Carousel with some other friends who stopped by. The beautifully restored carousel was exquisite with each animal carved in great detail. As we chose our animals, we couldn’t help but laugh, reminiscing about our childhood; around and around we rode, accompanied by music from an antique Frati band organ. At only 5 cents a ride (!!), this was a true delight. In addition to horses, there were lions, goats, camels and giraffes, 68 animals in total. If you have a young family, this is a must! Heck, even if you don’t have a young family, do it! You will smile a lot and feel carefree and happy. 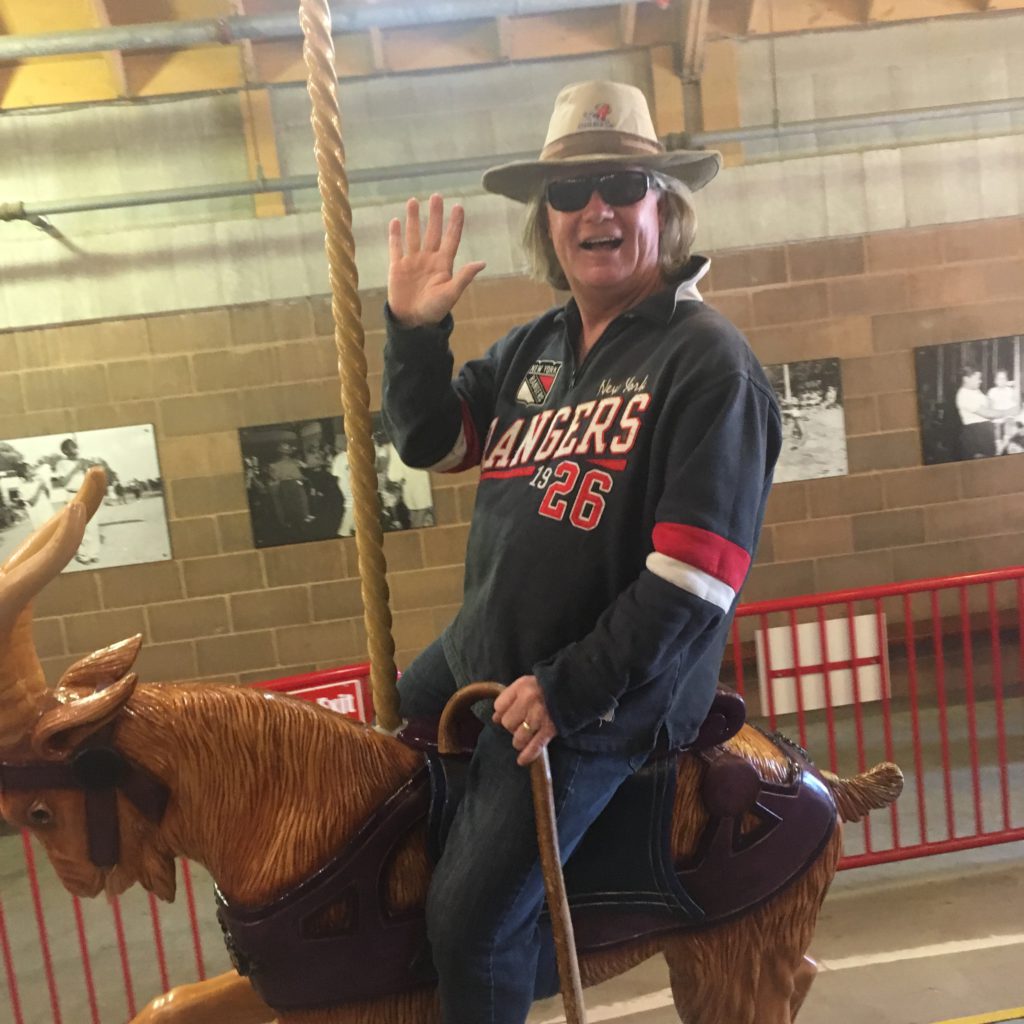 Tom and Liza came back two days early; although they told us they ran into some rainy weather, I suspect the unspoken reason was they missed their fur babies.

We had another amazing dinner that night – planked salmon on the bbq, bacon-wrapped asparagus and a great tasting salad – again served with wine (PS Tom is an amazing cook!). We stayed that night and left the next morning with promises to return if we were ever in the area.

This was a great house sit in every way – getting to know the area, meeting new friends, a comfortable home and two beautiful dogs to care for.

This wraps up our house sits with Trusted House Sitters for now as we will be in Mexico for 6 months. And to cap off our house sits, we again received 5 stars!

Watch for our blogs from Mexico as we continue to have new experiences and meet new people. Fun and exciting times ahead!

Please feel free to share any house-sitting experiences you have had – the good and the bad, the funny and not so funny!