When we first took on this pet/house sit in Burlington, I was just a bit skeptical – the sit entailed 2 dogs, 3 cats, a couple of geckos and some fish – a bit of a mini zoo.

However, it did not take us long to get into a routine!

Shannon and Brandon are an awesome younger couple who were heading to Nova Scotia for a mini 4-day vacation and needed someone to take care of their pets. We liked them immediately and they seemed to be comfortable with the fact that we were there to help out.

The area they are located in is North Central Burlington between Highway 407 to the north and Upper Middle Road to the South. The western boundary is Guelph Line and the eastern, Walker’s Line.

Their home is a comfortable and clean 3 bedroom, 2.5 baths with open concept and sliding back doors into the yard. The location itself was great for walking and we were literally about 5 minutes from a major grocery store, LCBO, gas station, Starbucks and Tim Horton’s as well as a few other businesses. It was also a short drive to the waterfront.

Don’t you just love that name? Groot is a 2-year-old male, medium size Siberian Husky who would get a bit excited, especially when it was time for his walk. Siberians are known for their intelligence, independence and loving nature and although Groot was affectionate, he did not need constant attention. Siberians can also be destructive and Shannon and Brandon warned us about leaving our shoes or anything that was chewable within reach.

Aussie, also a medium-size dog, is an 11-year old Icelandic Sheepdog. It was thought that this breed was the companion to the ancient Vikings and was used to protect flocks of lambs from birds of prey. We noticed that Aussie liked to bark at birds, and anything else that moved, which is inherent in their nature. He was very vocal when someone strange came to the door so we did not worry about any unexpected surprises.

Both Groot and Aussie were happy to be fed, brushed and have a couple of walks a day.

The cats were really fun and had such different personalities.

Thunder, the oldest, is 9 years old and looked like a grumpy old cat who belonged out in the wild. Yet he was the sweetest cat who loved to climb up on my husband’s chest and spend some quiet time with him – on his terms, of course! Thunder required some medication which was a piece of cake (well, a pill actually). For an old dude, he sure ate well and never left so much as a crumb in his dish. 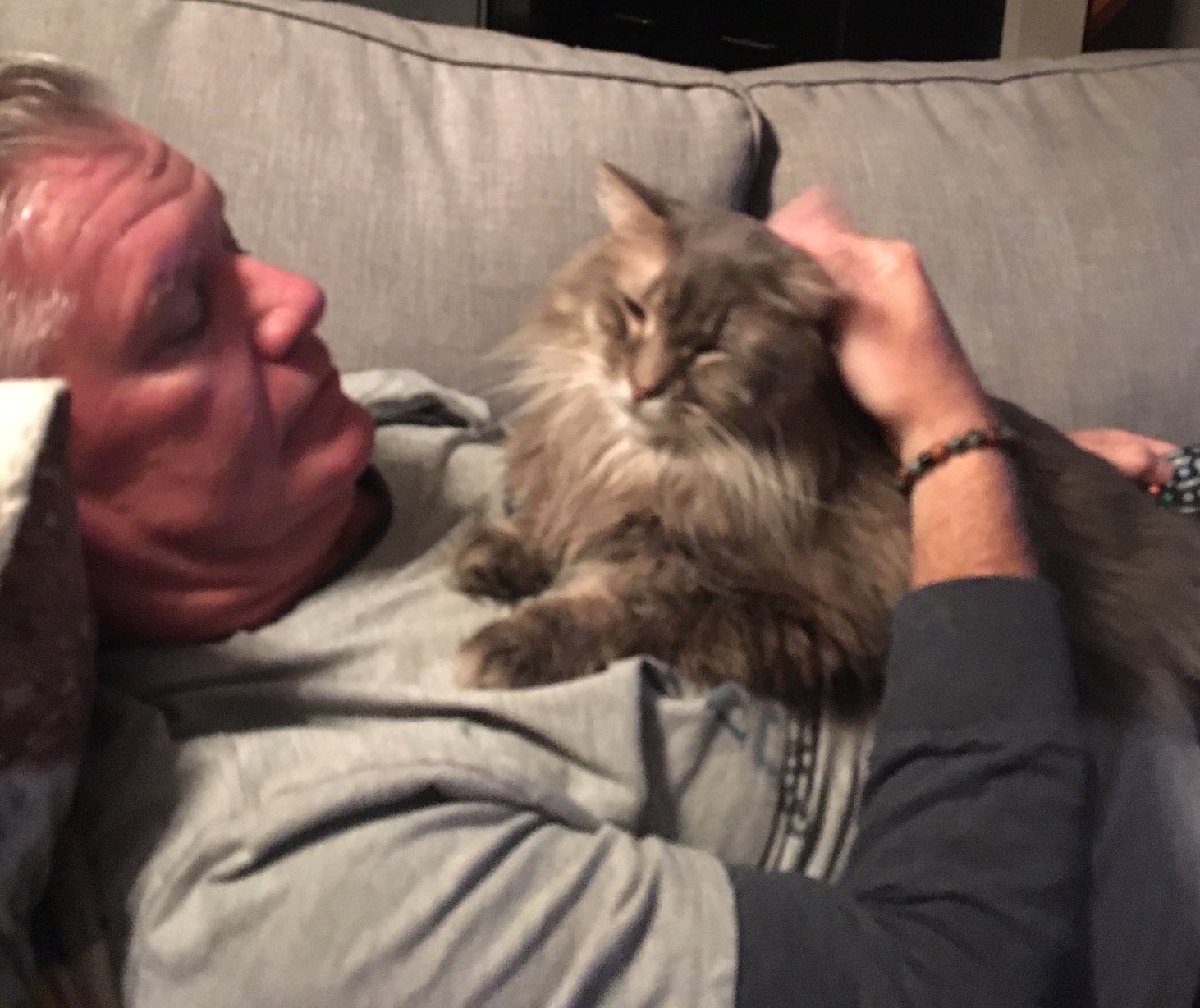 Jade, the three-year-old and the middle cat, was a bit quieter and shy. The first day she barely ate anything (part of this Shannon and Brandon thought was due to the new cat station which might have confused her a bit). However, she soon learned if she didn’t eat her food, then Thunder and Hope would. Jade also loved to hog the television, plopping herself down where she could get the best view.

Hope, the 2-year old, was a little imp! Her specialty was taking anything that wasn’t nailed down. Shannon warned us that we couldn’t leave anything, like small pieces of jewellery or car keys or literally anything that she could get her paws and mouth on.

We had one panic attack. My husband could not find his gold medal (that used to belong to his Dad) and his shark’s tooth pendant. After looking literally everywhere, top to bottom, I spied a piece of leather on the side of the bed and when I pulled it out, it was the pendant (turns out he was so tired the night before he just tucked them in the side of the bed and forgot!). The medal was also there. Whew! So Hope was in the clear.

Hope also had a favourite hang out spot, looking like a sweet innocent princess.

They all loved to have their cuddles and were very friendly although I would say that Thunder was the most independent of the three often spending time alone.

The geckos, Charlie and Cody – 4 and 6 years old respectively, are fat-tailed geckos. At first, I did not go near them but then I was curious to see what they looked like. They were very docile and only came out at feeding time. My husband fed them only twice – live crickets – so I didn’t spend a lot of time near them.

The fish, of course, did not require much care.

All in all, this was a very interesting house sit and a very successful one with us receiving another 5 stars. Shannon and Brandon were very upfront about the personalities of the dogs and cats and how to avoid any issues. We certainly wouldn’t hesitate to look after their little family again should they ever need us to.

House sitting can be very rewarding. You will meet so many interesting people and their precious pets. It also gives you an opportunity to explore an area that you have always wanted to go to. Click here if you would like to know more and feel free to leave any comments below.