After we left Collingwood, we made an overnight stop in Ottawa before heading to our next house sitting opportunity in Moe’s River Quebec, Canada.

Moe’s River is sandwiched between Compton and Coaticook. It was an easy drive from Ottawa, about 312 km away.

Compton is described as a municipality in Coaticook Regional County Municipality in the Estrie region of Quebec. It is bordered on the north by Waterville, the east by Martinville, the south by Coaticook and on the west by Hatley and the township of Hatley. The village itself is approximately 15 kilometres from the south end of Sherbrook and only 25 kilometres from the U.S. Border. 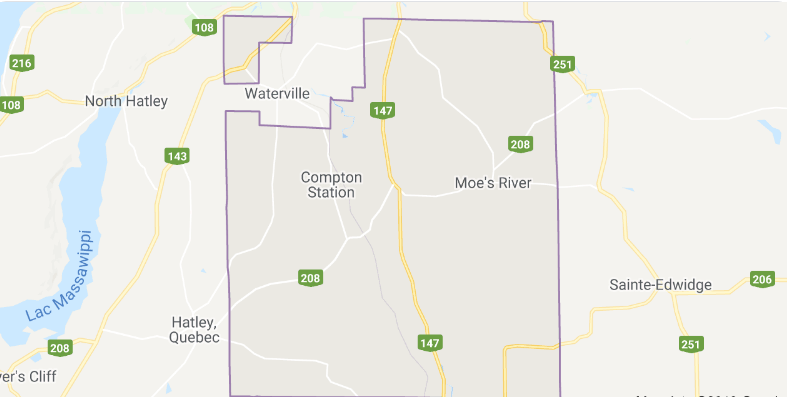 Compton is a ten 10 mile drive from Coaticook and 20 minutes from Sherbrooke.

At first glance, you might think Compton doesn’t have a lot to offer but there are three rivers that flow through the municipality from south to north, in the centre of Coaticook River and east to the Moe and Salmon Rivers. There are over 80 kilometres of country lanes, beautiful landscapes and valleys. It also boasts approximately 140 agricultural businesses.

Many young families, who are looking for a better quality of life for their children, are choosing to move here.

Coaticook (a French person doesn’t pronounce it as Coat – i – cook but more like Quat-i- cook) at least that’s how we were told.

A town in southeastern Quebec, Coaticook is on the Coaticook River and in the Coaticook Regional County Municipality. Its southern border is also the Canada-United States border. (Source Wikipedia). The population in 2011 was 9,255. It also has the world’s longest pedestrian suspension bridge (169 m) which spans the magnificent Gorge de Coaticook.

Coaticook is a well-known tourist destination. At the Parc de la Gorge, you will find the Forestra Lumina nocturnal pathways, all lit up with fairy lights. It was believed that magical creatures lived in the woods. Up to 2017, a total of 375,000 visitors have been drawn to it, paying for a 1.6-mile nighttime stroll.

If you are planning to visit this summer, book your tickets now. Besides rates and schedules, the website also gives a lot of useful information such as:

Local legend says a girl name Margaret lived near the forest years ago and had a special gift. It was believed she could see things that others couldn’t such as fairies and magical creatures and her soul is still in the forest and it lights it up.

Tasty treats abound in Coaticook such as this tasty looking pancake (looks almost too pretty to eat) which we had at the L’Eggspress Du Verger on Child Street. Yum! 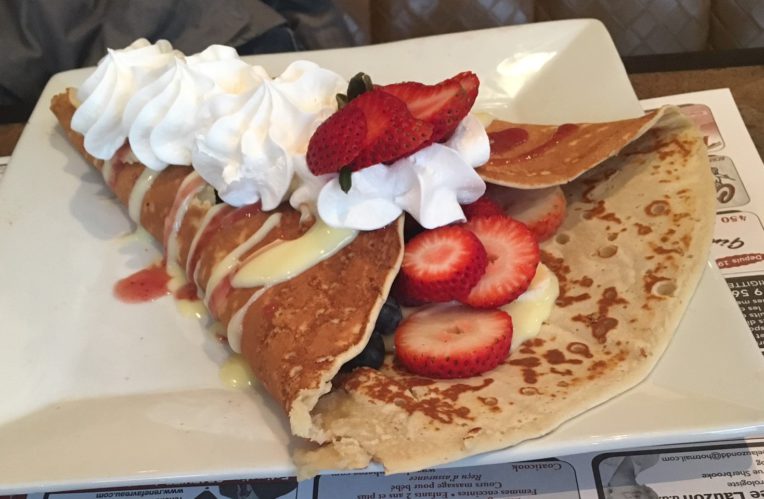 Finally, we come to Moe’s River where we house sat. It is one of the oldest picturesque hamlets and is a popular spot for vacationers.

Moe’s River is in the Eastern Townships in Quebec and a tributary of the Saint-Francois River. It is about 190 mi (306 km) east of Ottawa and 14 mi (23 km) from Sherbrooke Airport. It is 6.2 km from Compton and 16.9 km from Coaticook.

Our Host Pierre’s home was a quaint little house nestled on 5 acres of land in a small hamlet of Moe’s River. You immediately felt the peace, surrounded by many many trees – no noise from traffic! In fact, on our first day there we saw a young deer quietly munching in one of the big fields, only to scamper off when we stopped to take a photo.

Pierre himself is a gracious host who owns a boat selling company and travels all over Canada to participate in boat shows and promote his boats. If this is a passion of yours, you can connect with Pierre at Topper or Parallel 45 Marine. Before we left, he took us to the place where they store some of the beautiful boats that they promote and sell.

The home was comfortable and warm, easy to look after and situated in a great spot. You could see why Pierre loved this place.

Our Reason For Being There

Buddy is a six-year cross between a Japanese and Labrador breed and absolutely lovable. He has such a beautiful and kind face. 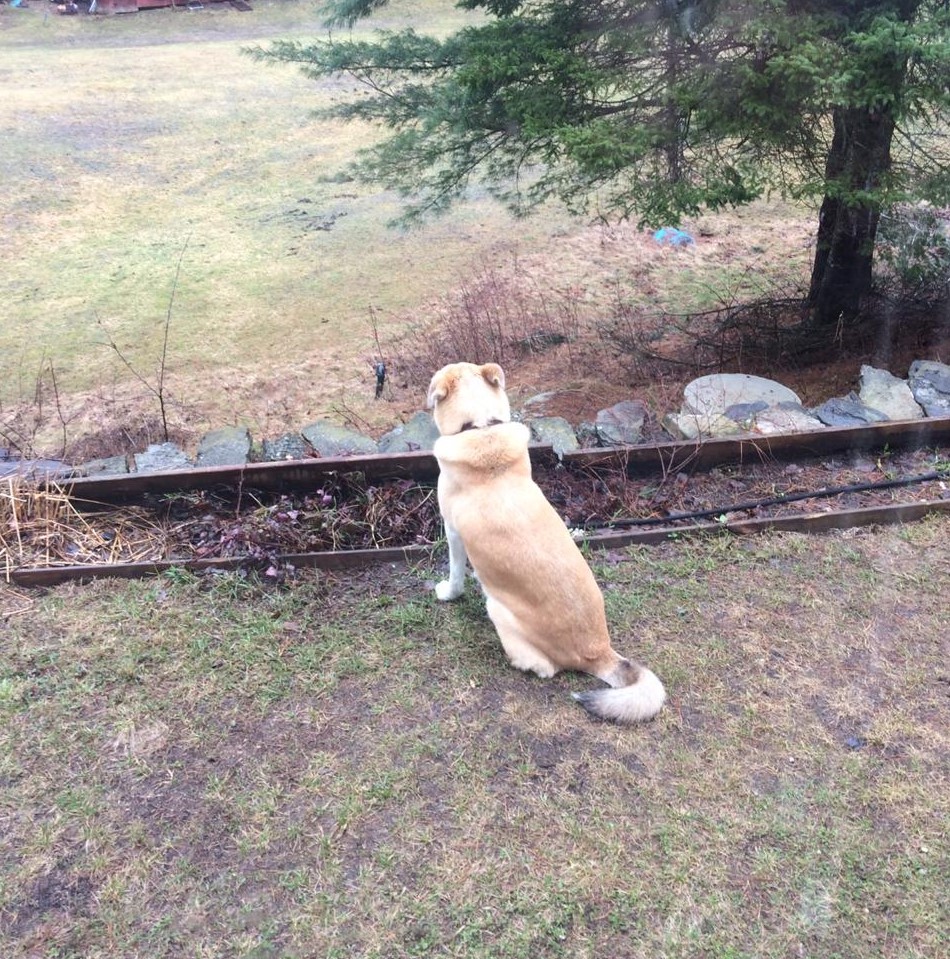 When Buddy was inside he was quiet and quite content to be petted and rubbed. Outside, he loved to wander on his own; sometimes we would catch him just sitting as if he was watching over his vast domain which I am sure he was! 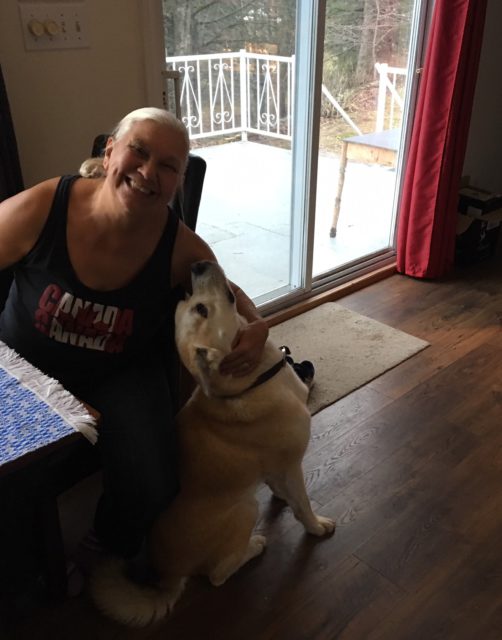 Buddy was very easy to care for, did not require any special medication and once asleep we did not hear from him until morning.

We understood he was a hunter but he did not present us with any of his spoils while we were there – I’m not sure that was a bad thing!

Even though our stay was short, we really enjoyed this house sit and wish we could have had more time to check out some of the local attractions.

We have been fortunate to meet some really terrific hosts and pets and Pierre and Buddy were no exception. We definitely would return.

On our way from Moe’s River to Ottawa for our next house sit, I snapped a photo from the car in Magog, and then we stopped at Mousette Park, Gatineau, on the northern bank of the Ottawa River. Ottawa had been going through some major flooding and we wanted to get a few pics of the water.

If you would like to know how we are able to travel to places like Quebec, check out Trusted House Sitters.

Have you ever been to Quebec and did you like it? What was your favourite experience?

I love to travel and my biggest regret is that I waited so long to do it, thinking I just couldn’t afford it. I have had some crazy fun, met some amazing people, and had some scary moments such as getting locked in a shower at a campsite. For our trip to Mexico, we were able to save money by house sitting, which was something completely new to us. If this is something that interests you, then check out TrustedHousesitters or HouseSitMexico We hope you visit often.